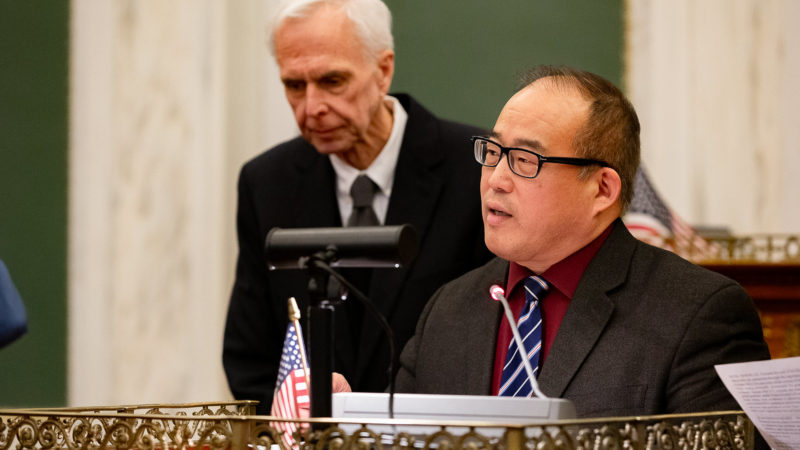 A coalition of Republican ward leaders are trying to give one of their own the boot in next week’s primary, marking the latest chapter in a longstanding feud with ties to the Philadelphia Parking Authority.

At least a dozen wards — most of them in the Northeast — will not be including incumbent GOP Councilman David Oh on their sample ballots. These recommended lists will be distributed at polling places in some of most heavily Republican neighborhoods in the city on Election Day. There are seven Republicans running for City Council at-large, but only five will advance to the November general election.

“I call them the PPA guys,” said a nonplussed Oh, of his detractors within the party. “They cut me out every election.”

Dan Tinney, a Republican at-large hopeful who has been eyed as a successor to Oh, heads up one of those Republican wards, but he says he had nothing to do with the snub.

“I wasn’t one of the ward leaders that put the ballot together,” Tinney wrote in an email.

Tinney, a steamfitter backed by the building trades and other unions, offered two suggestions for why Oh lost party support.

One: Oh’s opposition to a bill from Pa. Rep. Martina White, a fellow Republican, that sought to cut off state dollars to Philly as punishment for its “sanctuary city” policy. The other? That Oh joined with the Dems to declare the weekend of St. Patrick’s Day as “Meek Mill Weekend” in recognition of the local rapper’s criminal justice reform efforts.

Numerous sources, however, contend the break stems from Oh’s unsuccessful push to audit the scandal-plagued PPA, a notorious patronage mill for the Republican machine.ADVERTISEMENT

The so-called “PPA guys” counter that Oh is sore about losing past endorsements from both GOP and building trades leaders — and that he’s turned the gripe into a vendetta against the authority.

David Oh vs. the PPA, or vice versa?

In 2016, Oh pushed for an audit of the state-run PPA to shine a light on the authority’s mismanagement and network of patronage hires. Council scuttled the effort. But a year later, the state auditor general probed the authority and found that mismanagement had resulted in nearly $80 million in lost revenue for the underfunded Philadelphia School District.

The state-run PPA is the only Republican stronghold among public agencies in Philadelphia.

Former PPA director Vincent Fenerty, who was ousted after a sexual harassment scandal, is a current Republican ward leader, as is and Walter Vogler Jr., the PPA’s deputy director of airport operations. Both wards are part of the Oh-less coalition. At-large Republican Councilman Al Taubenberger also holds a post on the PPA board.

It’s no secret that Oh is unpopular with PPA Chairman Joe Ashdale, who is also the business manager for District Council 21, a painter’s union. Perhaps unsurprisingly, Ashdale’s union and the other building trades are not supporting Oh’s re-election bid this year.

That comes as little shock to Oh, who in 2011 became the first Asian American elected to City Council. He noted that both the politically powerful building trades unions and the PPA faction of the Republican establishment have bucked him in the past.

“They had people at the polls saying ‘Don’t vote for Oh, he’s a traitor, he’s not a Republican, he’s an illegal immigrant,’ all kinds of stuff,” said Oh.

He didn’t take it personally, though, he claims.

The far-right sees Oh as ‘an evil’

PPA infighting aside, some say Oh has larger support issues within the party that could hurt his chances this year. Michael Meehan, chair of the Philly GOP, sees both Oh and Taubenberger as vulnerable in the current climate.

“It’s not like David [Oh] is loved by the far-right,” Meehan said. “Those people who don’t like him, they see him as an evil.”

Republican observers agree that both lawmakers have faced criticism within the party. Many party hardliners often criticize them for not being Republican enough, breaking with the party on issues to curry favor with the overwhelmingly Democratic Council.

“I think many in the Philadelphia GOP grassroots are wondering what accomplishments exactly the two ‘Republican’ incumbents are able to boast about after a combined decade in office,” said Albert Eisenberg, a local GOP political consultant.

Lack of party-wide endorsement means that coalitions of Republican ward leaders may have outsize influence in a low-turnout election.

Oh has more name recognition than his competitors, however, and history on his side. In the 2015 primary election, he finished first place among his Republican rivals with 18 percent of the vote.