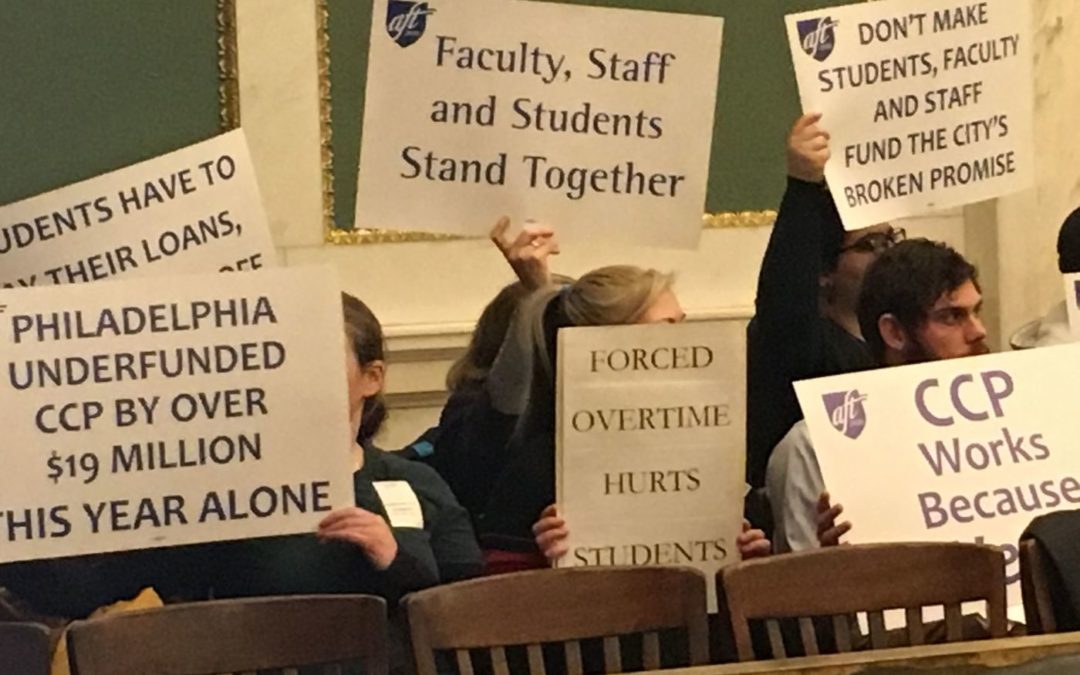 As faculty and support staff at Community College of Philadelphia move closer to a strike, some city officials are looking at how the city funds the college and whether it should do more.

The city provides about 20 percent of the college’s $130.6 million operating budget. City Councilman David Oh said the city should cover a third, as planned when the state law establishing community colleges passed in 1963.

“We fund lots and lots of things, but we are not funding what I think is one of the most important things we can do for the citizens of Philadelphia,” Oh said. “We have this wonderful asset, but it’s woefully under-resourced.”

Where the city would come up with an additional $16 million is uncertain. Mayor Jim Kenney proposed a $1.3 million increase in the college’s funding for next year, for a total of $33.8 million.

“The mayor’s budget proposal for the coming year doesn’t mean he’s not sympathetic to their needs,” said Mike Dunn, the mayor’s spokesperson. “But this is a city of very limited resources, so it’s a question of trying to make sure a great number of priorities are met.”

At a public hearing Tuesday, City Council heard passionate speeches from students, faculty, and staff about the college’s importance and the need to better fund it. Among those testifying were former a prison inmate who has found “the happiest time of my life” pursuing a degree at the college; another student who said she had “never been so challenged, so engaged,” as at the college; and an alumnus who credited the college for his success.

“The future of CCP seems personal to me, because it helped solidify my own future,” said Justin Keller, an alumnus who was the college’s male athlete of the year in 2013. It’s imperative, he said, “for those like me who need a second chance, and especially for those who never got the first chance they deserve.”

“The School District of Philadelphia has failed so many students, and I don’t think the city can afford to fail them again,” said English professor Marissa Johnson-Valenzuela.

Oh said the testimony would be used to urge Kenney to further increase funding in his budget. If that fails, Council can fight for more during the budget process, he said.

“To the extent the city can increase its contributions to the college and continue to move closer to the one-third contribution,” he said, “it will alleviate the financial burden on our current and prospective students.”

The college draws 54 percent of its budget from tuition and fees.

The college administration and faculty and support staff have been locked in tense negotiations for a new contract. The union recently announced members would vote March 27 on whether to strike.

Funding levels and methods differ at community colleges around the state. Some get local funding from school districts. Most are supported by their counties or, in Philadelphia’s case, the city. None gets the 33 percent from the local sponsor initially envisioned in the law, nor does any get 33 percent from the state as was intended. That means more than half the cost is covered by student tuition and fees.

Montgomery County Community College gets 19 percent of its operating budget from the county, 22 percent from the state, 54 percent from tuition and fees, and 5 percent from other sources, said spokesperson Diane VanDyke.

By comparison, Delaware County’s community college receives 9 percent of its operating budget from local school districts, about 26 percent from the state, about 53 percent from tuition and fees, and the rest from other sources, said spokesperson Anthony Twyman. Students from sponsoring districts pay reduced tuition, he said.

And in Bucks County, which calculates its percentages including capital contributions, about 18 percent is covered by the county, said college president Stephanie Shanblatt. The percentage is lower when looking at just operating costs, she said. The college gets about 28 percent from the state, 51 percent from students, and the rest in other revenue.

Shanblatt, who chairs the state commission on community colleges, said that every year the college asks the county for more money but has only received one increase in the last few years.

“We work really hard to maintain that instructional quality,” she said. “It’s challenging when appropriations are flat or almost flat from the state and county.”